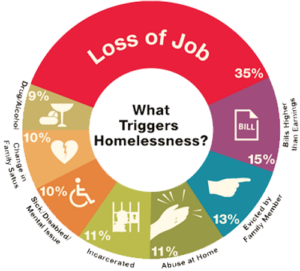 Scope of the Problem
According to the most recent report from the U.S. Department of Housing and Urban Development (HUD), there are more than 610,000 people experiencing homelessness on any given night in this country There are about 29,000 homeless people in Arizona — one in every 227 Arizonans.  And an estimated 61% of them are in Maricopa County.  Statewide, approximately 2,500 people are considered “unsheltered,” living on the streets. Most of them were single adults, and 79% of them are men.

Not everyone is aware of the costs.

For the individual or family without a home, the impact can be devastating. Imagine for a moment what it would mean in your own life to be without a place to sleep, to shower, to keep your clothing and possessions, to build your life.

According to the National Alliance to End Homelessness, families experiencing homelessness are generally similar to other, housed families living in poverty. In fact, many poor families – homeless or not – share similar characteristics: they are usually headed by a single woman with limited education, are usually young, and experience high rates of domestic violence and mental illness.

Some families living in poverty fall into homelessness as a result of some unforeseen financial challenge – such as a death in the family, a lost job, or an unexpected bill – which creates a situation where the family cannot maintain housing.

In addition to the direct impact on individuals and families who are without a home, enormous costs accrue to our society in general from the problem of homelessness. These costs are incurred in the areas of medical treatment, hospitalization, police intervention, incarceration, the provision of emergency shelters, and other areas. In fact, nearly $103 million is spent annually on chronically homeless individuals in our community.

Contributing Factors
While circumstances vary, the main reason people experience homelessness is because they cannot find housing they can afford. A lack of affordable housing in the United States contributes to the inability to acquire or maintain housing, particularly in urban areas where homelessness is more prevalent (Source: National Alliance to End Homelessness).

A variety of additional factors can contribute to the problem: chief among these are poverty, a decline in levels of public assistance, lack of affordable health care, mental illness, and addictive disorders.